ObjectiveThe custom-homebuilding company, Cosmic Garden Co. Ltd., located in Okayama City, Japan was established in 1997 and uses specific natural ore powder (SNOP) in wall materials and surveys customers in order to improve allergic symptoms. MethodsTo investigate the biological effects of SNOP, patients with a pollen allergy were recruited to stay in a room surrounded by cloth containing SNOP (CCSNOP), and their symptoms and various biological parameters were compared with those of individuals staying in a room surrounded by control non-woven cloth (NWC). Each stay lasted 60 min. Before and immediately after the stay, a questionnaire regarding allergic symptoms, as well as POMS (Profile of Mood Status) and blood sampling, was performed. Post-stay minus pre-stay values were calculated and compared between CCSNOP and NWC groups. ResultsResults indicated that some symptoms, such as nasal obstruction and lacrimation, improved, and POMS evaluation showed that patients were calmer following a stay in CCSNOP. Relative eosinophils, non-specific Ig E, epidermal growth factor, monocyte chemotactic protein-1, and tumor necrosis factor-α increased following a stay in CCSNOP. ConclusionThis ore powder improved allergic symptoms, and long-term monitoring involving 1 to 2 months may be necessary to fully explore the biological and physical effects of SNOP on allergic patients.
2
Optimized Methods for Biofilm Analysis in Yersinia pestis
FANG Nan, GAO He, WANG Li, QU Shi, ZHANG Yi Quan, YANG Rui Fu, ZHOU Dong Sheng
2013, 26(5): 408-411. doi: 10.3967/0895-3988.2013.05.012
PDF 3510KB

The causal agent for SARS is considered as a novel coronavirus that has never been described both in human and animals previously. The stability of SARS coronavirus in human specimens and in environments was studied. Methods Using a SARS coronavirus strain CoV-P9,which was isolated from pharyngeal swab of a probable SARS case in Beijing, its stability in mimic human specimens and in mimic environment including surfaces of commonly used materials or in household conditions, as well as its resistances to temperature and UV irradiation were analyzed. A total of 106 TCID50 viruses were placed in each tested condition, and changes of the viral infectivity in samples after treatments were measured by evaluating cytopathic effect (CPE) in cell line Vero-E6 at 48 h after infectionn. Results The results showed that SARS coronavirus in the testing condition could survive in serum, 1:20 diluted sputum and feces for at least 96 h, whereas it could remain alive in urine for at least 72 h with a low level of infectivity. The survival abilities on the surfaces of eight different materials and in water were quite comparable, revealing reduction of infectivity after 72 to 96 h exposure. Viruses stayed stable at 4℃, at room temperature (20℃) and at 37℃ for at least 2 h without remarkable change in the infectious ability in cells, but were convened to be non-infectious after 90-, 60- and 30-min exposure at 56℃, at 67℃ and at 75℃, respectively. Irradiation of UV for 60 min on the virus in culture medium resulted in the destruction of viral infectivity at an undetectable level. Conclusion The survival ability of SARS coronavirus in human specimens and in environments seems to be relatively strong. Heating and UV irradiation can efficiently eliminate the viral infectivity.
6
The Serum Exosome Derived MicroRNA-135a, -193b, and-384 Were Potential Alzheimer's Disease Biomarkers
YANG Ting Ting, LIU Chen Geng, GAO Shi Chao, ZHANG Yi, WANG Pei Chang
2018, 31(2): 87-96. doi: 10.3967/bes2018.011
HTML Full Text PDF 11333KB

Objective To study the relationship between ambient air pollution and daily mortality of SARS in Beijing. Methods The approach of time-series Poisson regression was used to assess the relationship between daily SARS mortality, ambient air pollution, and other factors from April 25 to May 31, 2003 in Beijing. Results An increase of each 10 μμg/m3 over a 5-day moving average of PM10, SO2 and NO2 corresponded to 1.06 (1.00-1.12), 0.74 (0.48-1.13) and 1.22 (1.01-1.48) relative risks (RRs) of daily SARS mortality, respectively. The relative risks (RRs) values depended largely on the selection of lag days. Conclusion The daily mortality of SARS might be associated with certain air pollutants in Beijing.
12
Evaluating the Nutritional Status of Oncology Patientsand Its Association with Quality of Life
ZHANG Ya Hui, XIE Fang Yi, CHEN Ya Wen, WANG Hai Xia, TIAN Wen Xia, SUN Wen Guang, WU Jing
2018, 31(9): 637-644. doi: 10.3967/bes2018.088
HTML Full Text PDF 31943KB

Major and profound changes have taken place in China over the past 30 years.Rapid socioeconomic progress has exerted a great impact on lifestyle,ranging from food,clothing,working and living conditions,and means of transportation to leisure activities and entertainment.At the same time,new health problems have emerged,and health services are facing new challenges.Presently,cardiovascular diseases (CVD) are among the top health problems of the Chinese people,and pose a serious challenge to all engaged in the prevention and control of these diseases.An epidemic of CVD in China is emerging as a result of lifestyle changes,urbanization and longevity.Both national policy decision-making and medical practice urgently need an authoritative report which comprehensively reflects the trends in the epidemic of CVD and current preventive measures.Since 2005,guided by the Bureau of Disease Prevention of the Ministry of Health of the People's Republic of China and the National Center for Cardiovascular Diseases of China,nationwide experts in the fields of epidemiology,clinical medicine and health economics in the realms of CVD,cerebrovascular disease,diabetes and chronic kidney disease,completed the Report on Cardiovascular Diseases in China every year.The report aims to provide a timely review of the trend of the epidemic and to assess the progress of prevention and control of CVD.In addition,as the report is authoritative,representative and readable,it will become an information platform in the CVD field and an important reference book for government,academic institutes,medical organizations and clinical physicians.This publication is expected to play a positive role in the prevention and control of CVD in China.We present an abstract from the Report on Cardiovascular Diseases in China (2010),including trends in CVD,morbidity and mortality of major CVDs,up-to-date assessment of risk factors,as well as health resources for CVD,and a profile of medical expenditure,with the aim of providing evidence for decision-making in CVD prevention and control programs in China,and of delivering the most authoritative information on CVD prevention and control for all citizens.
14
Risk Assessment of MOAH and MOSH inInfants and Young Children
ZHU Lei, ZHANG Hong, CHEN Yan Fen, PAN Jing Jing, LIU Ai Dong, PAN Feng, ZHANG Jian Bo, ZHONG Huai Ning
2019, 32(2): 130-133. doi: 10.3967/bes2019.018
HTML Full Text PDF 2392KB

Objective To explore the effects of resveratrol-induced apoptosis and autophagy in T-cell acute lymphoblastic leukemia (T-ALL) cells and potential molecular mechanisms.
Methods The anti-proliferation effect of resveratrol-induced, apoptosis and autophagy on T-ALL cells were detected by using MTT test, immunofluorescence, electronic microscope, and flow cytometry, respectively. Western blotting was performed for detecting changes of apoptosis-associated proteins, cell cycle regulatory proteins and state of activation of Akt, mTOR, p70S6K, 4E-BP1, and p38-MAPK.
Results Resveratrol inhibited the proliferation and induced apoptosis and autophagy in T-ALL cells in a dose and time-dependent manner. It also induced cell cycle arrest at G0/G1 phase via up regulating cyclin-dependent kinase (CDK) inhibitors p21 and p27 and down regulating cyclin A and cyclin D1. Western blotting revealed that resveratrol significantly decreased the expression of antiapoptotic proteins (Mcl-1 and Bcl-2) and increased the expression of proapoptotic proteins (Bax, Bim, and Bad), and induced cleaved-caspase-3 in a time-dependent manner. Significant increase in ratio of LC3-II/LC3-I and Beclin 1 was also detected. Furthermore, resveratrol induced significant dephosphorylation of Akt, mTOR, p70S6K, and 4E-BP1, but enhanced specific phosphorylation of p38-MAPK which could be blocked by SB203580. When autophagy was suppressed by 3-MA, apoptosis in T-ALL cells induced by resveratrol was enhanced.
Conclusion Our findings have suggested that resveratrol induces cell cycle arrest, apoptosis, and autophagy in T-ALL cells through inhibiting Akt/mTOR/p70S6K/4E-BP1 and activating p38-MAPK signaling pathways. Autophagy might play a role as a self-defense mechanism in T-ALL cells treated by resveratrol. Therefore, the reasonable inhibition of autophagy in T-ALL cells may serve as a promising strategy for resveratrol induced apoptosis and can be used as adjuvant chemotherapy for T-ALL.
19
The Emergence, Epidemiology, and Etiology of Haff Disease
PEI Pei, LI Xiao Yan, LU Shuang Shuang, LIU Zhe, WANG Rui, LU Xuan Cheng, LU Kai
2019, 32(10): 769-778. doi: 10.3967/bes2019.096
HTML Full Text PDF 2249KB 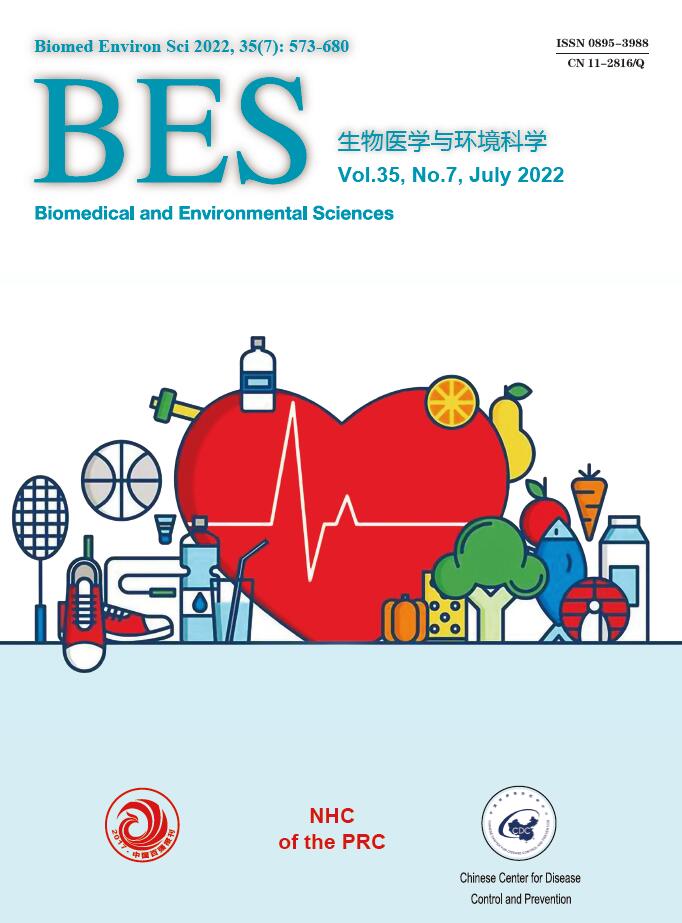